BUSINESS OF THE YEAR 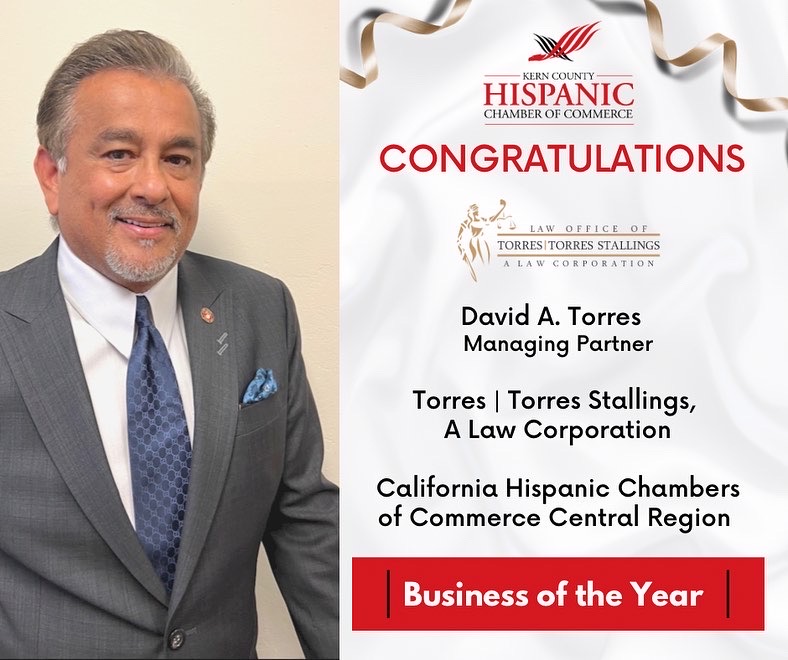 David A. Torres, Managing Partner of Torres | Torres Stallings has been a long-time supporter of KCHCC and the community at large. In 2009, Torres was honored as Kern County Hispanic Chamber of Commerce Businessman of the Year. Torres has been a member of KCHCC for decades and during his tenure as an active member he has served in the past as an ambassador, advisor, and legal counsel to the chamber. He contributed much of his time to assist various members, especially small business owners and entrepreneurs. During the KCHCC Small Business Academy, Torres is a presenter during the series of the academy and an inspirational speaker at the academy graduation. Torres believes in helping others achieve the American dream and truly cares for small businesses who make up the bulk of our Country, a true advocate he is.

Shortly after the Covid-19 Pandemic, in August 2020, Torres, along with Jay Tamsi and HA Sala joined forces to create the Kern County Latino Covid-19 Task Force initially, to bring awareness of the coronavirus to the Latino community.  As the task force evolved, its mission rapidly expanded to include all citizens of Kern County because of the need to educate and protect the citizens of this county. Since its creation, Torres has appeared in numerous television commercials and interviews in both English and Spanish mediums, informing the public about the need to remain Covid free and the importance of washing hands frequently, maintaining social distancing and avoiding large gatherings. Torres continues to volunteer his time at testing sites and numerous mass vaccination sites sponsored by the task force. Torres was extremely instrumental in organizing the vaccination of 3,000 plus Farmworkers in Kern County (March 2021) as well as the visit by Dr. Jill Biden and Governor Gavin Newsom to the historical UFW 40 Acres in Delano.

David A. Torres earned his Bachelor of Arts degree in Public Administration from Cal State University, Fresno and his Juris Doctorate degree from Gonzaga University School of Law in Spokane, Washington.